What Can I Say 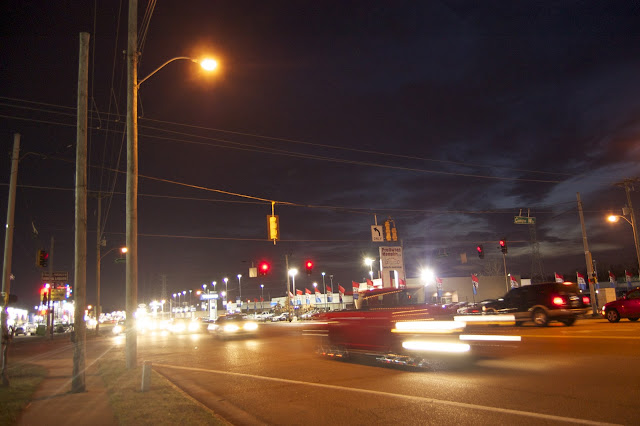 ... and it has been another great long day.

We're going to do a run in Bartlett tonight right? That was the plan for a few of us at school who wanted to participate in tonights activity. The location was Chris's house and he lived in Bartlett, the same city as I. The only problem was that he lived on the other side. The side that I don't dare go unless I feel like loosing every ounce of my sanity.

Me, "I can get to Bartlett, but I don't know where Chris lives."

And so the evening began with three cars trailing each other down the freeway to get to his house.

I have gotten lost innumerable times this semester, and realize that when this happens, I tend to loose head and all hell breaks loose. It's like caging a wild bird in a cardboard box. My ears begin to hurt and all I see are lights and cars. No rational thoughts, Nothing. Just pure pain. lol

Natalie drove in the lead, but after about twenty minutes,  she pulled over, rolled down her window, and told me that her GPS was lost and she was confused.

I took the lead this time, driving back the way we came. But as soon as I was getting onto the freeway, I noticed a familiar landmark and realized that Natalie had been indeed going in the right direction after all. But it was too late, I zipped back on the road and drove to my "Correct" Exit before pulling of to a gas station.

It was getting dark and I was a little embarrassed. Natalie and Emily pull up to my window, "I looked at her dryly, "I think I'm lost." Natalie burst out laughing in unstoppable way. "You looked so confident though!!" I mentally hung me head and followed her back on to the freeway.

Natalie, "We'll try this one more time, and if we get lost, we'll call Chris.

Me, "Tell him to bring his running clothes, we'll just run where we are."

Natalie laughed. Her GPS was now working and we went back the same way we had come.

Now did I mention it was getting dark out? I was a little concerned. Not only for me, but for Emily  who was driving behind me. I was hoping she could keep up with us. I noticed our exit coming up.  Ya, the correct one.... Natalie didn't take... oh heavens... she didn't take it! We are going the wrong way again.

Or maybe it's just my mind. Maybe it was this next one. I kept looking behind me. Poor Emily is going to get lost! Yup, I spied Emily's lights. She was taking the wrong exit. OH NO!

Natalie kept going and made the next exit in due time. I followed behind her. I was good at following...

Natalie soon enough pulled into a housing community area. But curiously, she began to speed up. "Wow, I thought" Doesn't she know I am trying to keep up!! I kept my eye on her as she began to zip around houses making a few quick right and left's onto smaller roads. In an effort to maintain her in my sites, I began to quicken my pace as well.

Soon enough she pulled into a drive way and I slowly pulled in too and parked along side of her, partially in the grass. Natalie sure took up space... Gosh.

As I looked out my window, my heart dripped to the floor. A strange woman was looking at me through the glass pane. That was not the woman I was following twenty minutes ago!

Now all mature adults at this time would have rolled down the window and apologized for the irregularity of such a meeting, but for me, it was only the dust my tires that begged her pardon a second later.

What can I say.

Oddly enough,  after having nearly loosing it and giving up, I found myself in familiar spot and by the grace of God, located Chris's house.

It was a fabulous run!!!

Posted by Unknown at 9:09 PM No comments: